Everyone in America knows the story of the Mayflower and the first Thanksgiving, but what if social media existed at the time?

When a group of radical Puritans decided to illegally break away from the Church of England, they sought after some financial aid. After searching, they came across Thomas Weston who funded their trip. He released this tweet the day they made their way to the unknown. 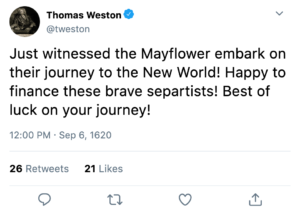 From there, the Mayflower headed west, intending to land in Virginia. Strong currents pushed them off course and caused them to land on the shore of Cape Cod at Plymouth rock. Their trip was grueling and tightly packed, so the sight of land was a relief to many. Unfortunately, there was no service so this Snapchat was the only one able to be recovered from the trip over. 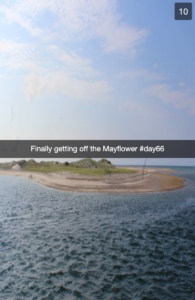 Before they got there, the men had decided the William Bradford should be the governor of the new land. In addition to this, the men had agreed to a governing plan called the Mayflower Compact. All men aboard the ship signed it and they used this to situate themselves in their new community upon arrival. See below the text William Bradford received from his nephew, Nathaniel Morton, who helped draft it up.

If you click on the picture, it is a photograph of the agreed-upon governing document.

Once they exited the ship, they realized how unprepared they were for the extremely harsh New England winter. They had no idea how to farm this new rocky terrain and were painfully unfit to live in this new climate. Out of the 102 voyagers, 45 died in that one winter. All of them were buried at Cole’s Hill. Governor William Bradford posted this seldom Instagram but it ended up being a saving grace. 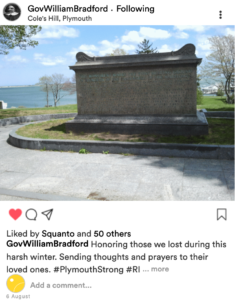 As you can see the Instagram user “@Squanto” liked this post. From there, he was able to direct message @GovWilliamBradford and this saved the colony.

Squanto was able to teach the pilgrims how to plant corn and squash, along with teaching them how to hunt the land. These newly learned tips helped launch the colony into success and created a harmonious relationship between the natives and the pilgrims. They celebrated all their hard work and gave thanks for the bounty of food with a large feast. This turned into Thanksgiving. Attached below is a wholesome Instagram post of them celebrating! 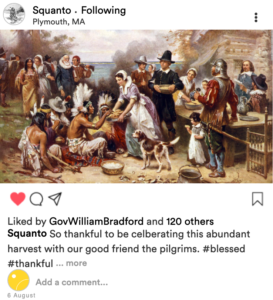 As I wrote this blog post and was generating all of this fake content, it made me think of all the cons relating to social media. Obviously, you must be so careful when it comes to how much you trust the information on the internet. As I thought more about this though, I had a slight change in perspective. If Bradford didn’t post that Instagram, Squanto would not have dmed him and they would not have been saved. This made me think of the Article “Social Media’s Not All Bad – It’s Saving Lives in Disaster Zones.” Social media saved lives by alerting people about incoming airstrikes just like social media saved the lives of the people in Plymouth who could not fend for themselves. Although we constantly dwell on the negatives parts of social media, if we look closely it can do a lot more good than we think.

Bradford, William. Bradford’s History of ‘Plimoth Plantation’ From the Original Manuscript. With a Report of the Proceedings Incident to the Return of the Manuscript to Massachusetts. Project Gutenberg, 2008.

Mancall, Peter C., and The Conversation. “Pilgrims Survived until the First Thanksgiving Thanks to an Epidemic That Devastated Native Americans.” CNN, Cable News Network, 27 Nov. 2019, www.cnn.com/2019/11/25/health/pilgrim-survival-disease-conversation-wellness/index.html.